Faith in Our Future 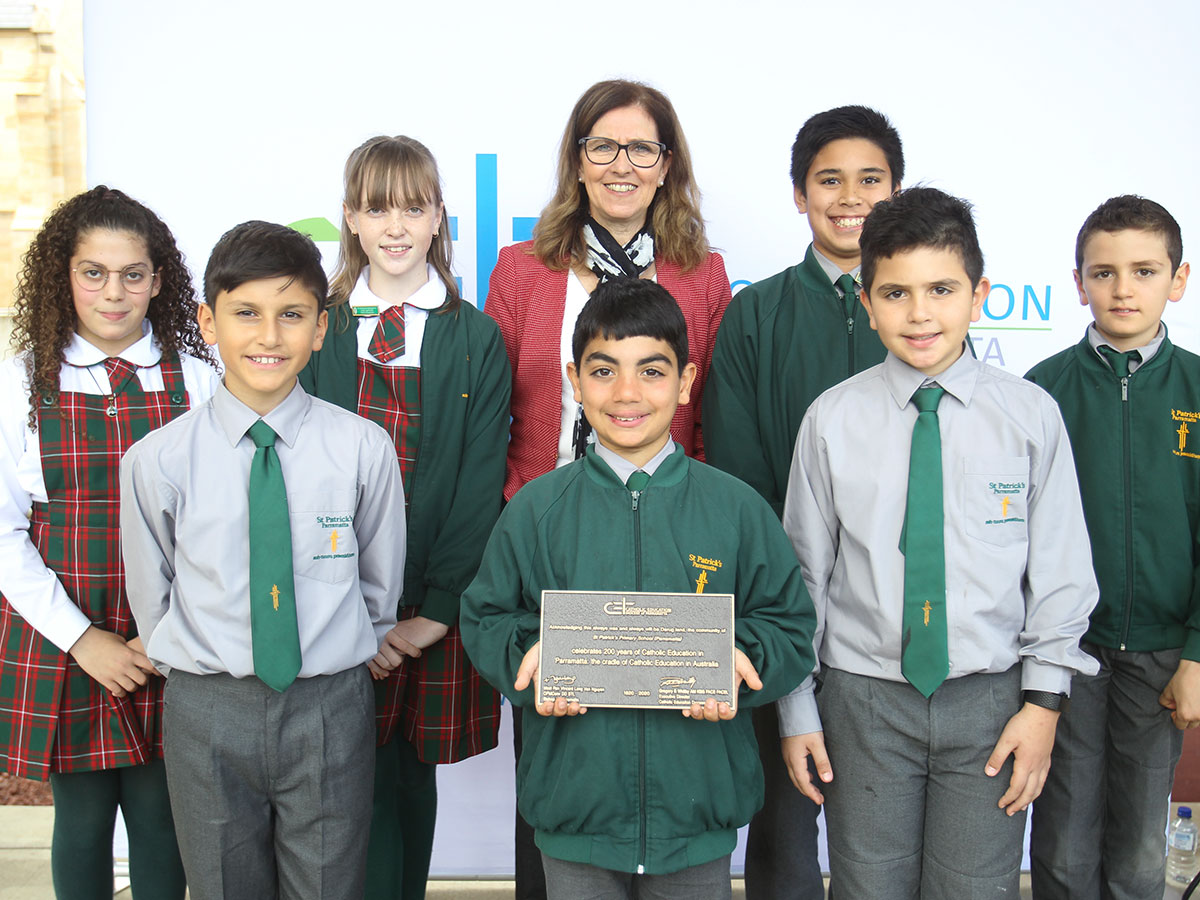 
On Monday 24 May 2021, the Catholic community of the Diocese of Parramatta celebrated 200 years of Catholic education in Australia at a Mass held at St Patrick’s Cathedral. The site of the first Catholic school established by Fr John Therry in 1820 is just a short stroll away in Hunter Street, Parramatta.


St Patrick’s Primary Parramatta grew from this first parish school and was strongly represented at the Mass by Principal Bernadette Fabri and student leaders Alexa and Dylan. The students were very excited to be present.

“Two hundred years is a long time,” Dylan said. “This is a monumental experience,” Alexa added.

Bernadette started her teaching career at the small local school in 1980 only to later return as Principal in 2014. She spoke about the history of the first school, and the welcome extended to non-Catholic students from the very early days.

“Being a welcoming community with opportunities for all is something we find very important at St Pat’s,” Bernadette shared.

Parramatta Marist High has a connection with the first school too. Year 8 student Connor was also excited to be a part of the “great occasion”. Principal Mark Pauschmann spoke about the significance of marking the bicentenary together as part of the National celebrations - Masses were held simultaneously right across the country.

The joyful event began with a moving Welcome to Country and Smoking Ceremony from Darug Elders Aunty Julie Webb and Uncle Lex Dadd. Students then processed into the Cathedral bearing the Australian, Aboriginal, Torres Strait Islander and Vatican flags.

In an inspiring homily, Bishop Vincent reflected on Diocesan Patroness St Mary of the Cross MacKillop’s exhortation, “never see a need without doing something about it”. He spoke powerfully of the need to form young people in “deep empathy and solidarity” to be “agents of God’s great justice and inclusion”.

Executive Director Greg Whitby also spoke about the legacy of St Mary of the Cross MacKillop, “a woman whose extraordinary faith effectively extended the opportunities of education to ordinary Australian children”. He presented Bishop Vincent with the painting about Parramatta’s history by Darug artist Leanne Tobin.

Around one in four students in Western Sydney now attend a Catholic school. From humble beginnings, Catholic Education Diocese of Parramatta is now a system of 80 great local schools. Each of these schools received a plaque to honour the occasion as part of the event. During the Mass itself, Bishop Vincent Long presented Santa Sophia Catholic College Box Hill, the newest school in the Diocese, with its plaque for installation at its new site to be completed later this year. 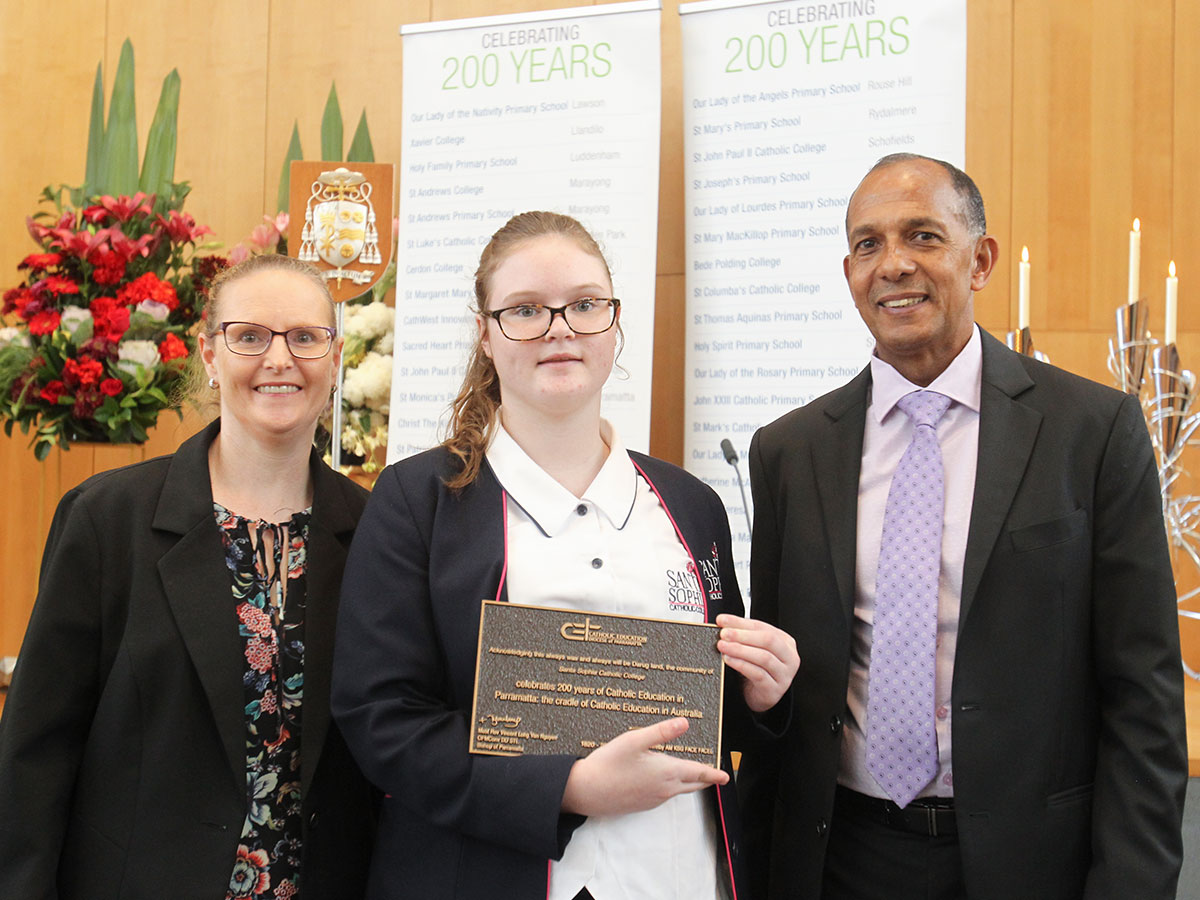 
Jessica, who was Santa Sophia’s first student when the school began to operate from an interim location on site at St John Paul II Catholic College Schofields, received the school’s commemorative plaque during the Mass.

“It has been amazing to be part of Santa Sophia from the beginning,” Jessica said. “I’ve grown up with it.” Like St Patrick’s student Dylan, Jessica agrees that 200 years is “a really long time”.

Catholic Education Diocese of Parramatta will continue to celebrate the bicentenary of Australia’s first Catholic school through a continued commitment to growing opportunities of Catholic education for all.

This milestone will provide the opportunity to learn from one another, inviting the voices, curiosity, and creativity of our students, teachers and parents to celebrate the gifts of faith and learning.

In owning the history of Catholic schools in Australia, we recognise the hurts of the past. We acknowledge the victims of abuse and injustice and continue to support them in healing together.

We acknowledge the history, stories, and Dreaming of the Darug people. We learn from the wrongs of the past, and these challenges guide us to a future that is accepting, welcoming and proudly diverse.

The history of Catholic education in Australia is far from staid, beginning with Irish insurgency in the early colony. We continue to grow from our beginnings in 1820, acknowledging the spirit, determination, and initiative shown by our earliest lay teachers.

Ours is a story of courage and determination with heroes like St Mary of the Cross MacKillop, a woman whose extraordinary faith effectively extended the opportunities of education to ordinary Australian children. We continue to grow from the foundations laid by the religious orders and the legacy of the clergy who dedicated their lives to building Catholic schools and their communities.

The contribution of the earliest Catholic schools transformed access to education for disadvantaged Australians. Today, Catholic Education Diocese of Parramatta builds on this legacy through leading, transforming learning and teaching and through outreach.

Above all, we celebrate all that unites us, and we commit to a hope that defines us, in living out God’s love for one another.

Send us an email